Many people have asked this question regarding roughness parameters.  Ramax? Rzmax?  These parameters often appear on drawings but don’t generally appear in measuring systems.

So let’s dig into this a bit.

The extension “max” has nothing to do with a “maximum” or an upper limit.  The extension “max” is used to invoke what is called the “max rule”.  The “max-rule” deactivates the ISO default “16% rule”.  (More on this in a minute.)   In terms of specifics, when you put “max” at the end of a parameter name, you invoke the max rule and you are saying –

“no single trace on this surface is allowed to go outside this tolerance limit”.

For example, the “max” rule can be applied to upper and lower limits (based on ISO 1302 formatting):

The above example requires that all measurements of the “Ra” parameter lie between 0.2 (lower limit) and 0.6 (upper limit) micrometers.  Did you catch that last sentence where it said “measurements of the Ra parameter”?   “Ra” is the parameter that we report with our measuring system.  “max” is the rule that we use to judge the part as being good or bad.

Wait a minute!  I thought the limits are the limits…

ISO 4288 provides “decision rules” for using surface texture measurements in determining if a specific part is good or bad.  Buried in this standard is a default rule which says something to the effect of “unless otherwise specified; up to 16% of the traces on a surface are allowed yield results that are outside the tolerance”.

In other words, if you make 100 measurements on a specific surface on a specific piece of metal – you must treat the surface as “good” if less than 16 percent of the measurements are outside the tolerance limits.  Yes, that means you can get lots of “bad” readings, but the part must still be considered as “good”.

Yes… this would be a good part – even if all of the orange trace locations were outside the tolerance limits:

The 16% come from statistics.  For a normally distributed set of results, the mean value, plus one standard deviation will include 84% of the observations.  Leaving 16% beyond the 1-sigma limit: 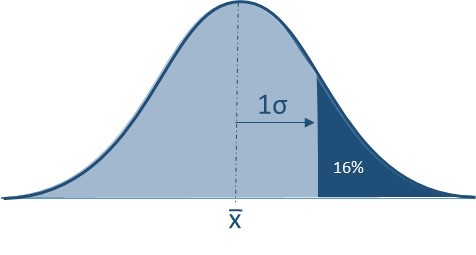 For the most part, designers want to control all of the surface.  Thus they are inclined to think in terms of the “max” rule.  However, many surfaces have flaws or defects that might not be part of the actual “texture” produced by the manufacturing process.  These flaws or defects need to be controlled.  However, they may be controlled by other means… not necessarily surface texture.

For example, in the optics industry many specifications contain specific details regarding “scratches and digs”.  These “flaws” are described and controlled.  Thus, when measuring surface roughness, if a flaw is encountered in a specific trace, that specific trace does not have to fall inside the roughness tolerance limits.