Engine cylinder bore surfaces are among the most “engineered” surfaces in the world. Millions and millions of hours (and dollars) have been spent on testing and optimizing these surfaces. And countless magazine and journal articles have been published on these surfaces.

Despite these efforts, we find that there is no single, “one size fits all” solution to this surface texture.

So, let’s look at some of the very different shapes that you might find in a cylinder bore. While there are many variations within each types of texture, these datasets can give you a general idea of the most common shapes.

The Digital Metrology Surface Library contains the areal/3D data for the 1mm x 1mm surfaces. Click on any of the images below to see the data in the Surface Library. If you are interested in the 4mm profile datasets, please contact us.

Conventionally honed, “single-process honed,” or “peak honed” surface texture is generally comprised of a crosshatched surface with fairly random peaks and valleys. For a perfectly random surface, the height of the peaks is similar to the depth of the valleys. In single-process honing we often find that the peak heights are slightly smaller than the valley depths due to the fact that the most extreme peaks are more vulnerable than the deepest valleys.

A plateau honed surfaces is the result of a rough honing process, which creates valleys, followed by a plateauing process, which removes the peaks. This is the most common process in cylinder bores for a wide variety of fuels. It achieves a surface that is more “broken in” from the start. The peaks provide a smooth upper surface while the valleys provide oil retention and debris collection. The process involves three basic controls:

Similar to peak honing, geometry and size may be established by an initial honing process, followed by the two plateauing stages.

In applications such as high performance diesel and some racing engines, an even more extremely plateaued surface is required. In these cases, the plateaued texture described above is pushed to more extreme limits.  The valley texture is created by an even rougher honing process, creating deeper valleys that are spaced farther apart. The plateaus are then created with even finer stones, often producing an almost mirror-like peak structure. 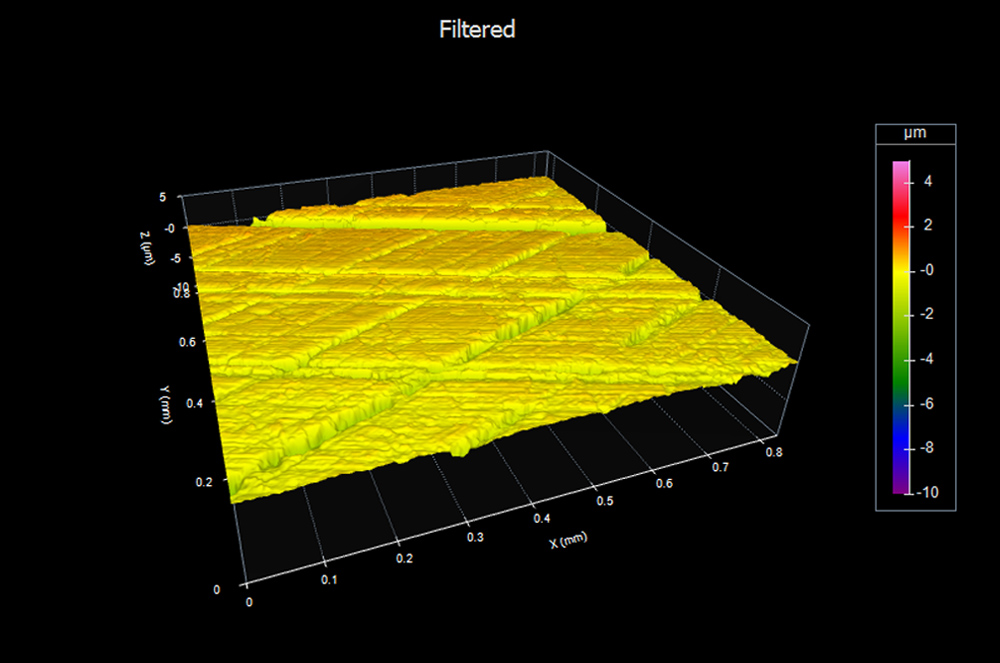 To create a plasma coated, or SUME Bore®, cylinder bore, manufacturers use a plasma process to spray one of many different coatings on the surface. This coated surface is typically somewhat porous and must be finish-honed to achieve the final texture. The finish-honing process for plasma cylinder bores typically involves very fine abrasives, and the resulting surface is made up of a very fine peak surface with exposed porosity.

Much like plateau honing, the plasma surface provides a “broken in” texture with a smooth upper surface along with porosity for lubrication retention and debris collection.

This data shows a sample coupon of a Nikasil® plated, used Porsche cylinder, taken below ring travel. It is indicative of a freshly-honed Nikasil, NSC, or nickel silicon carbide plated cylinder bore. Nikasil is electroplated onto the cylinder bore approximately 0.004-0.005” thick and is then diamond plateau honed. The crosshatch angle is typically shallower and the surface finish smoother than commonly found on steel or iron cylinder bores.

During break-in, very little changes to the surface profile on a Nikasil cylinder as the piston ring will wear in or break into the cylinder bore, unlike an iron or steel cylinder bore.

Lokasil® is a process for manufacturing aluminum engine blocks with silicon-reinforced cylinder sliding surfaces. It was developed by Kolbenschmit as an alternative to the alloy Alusil®. The high-silicon-content aluminum that makes up the cylinder bore wear surface is localized to the area of the cylinder bore exclusively, where with Alusil, the entire cylinder or engine block is cast out of the high-silicon-content aluminum alloy. The area that appears darker contains the silicon particles, where the lighter area does not have any silicon.

Lokasil, like Alusil, is not honed conventionally. There is no visible crosshatch. It is actually a chemical or mechanical process that removes the surface aluminum, exposing the silicon particles. The particles allow for formation of the oil film that supports the piston and rings during operation.

Lokasil and Alusil are registered trademarks of KS Aluminium-Technologie AG.